« Tanzplage » by Lea Martini and the importance of collective dancing 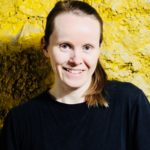 Dancing has the capacity of healing us from our demons; it transforms us and can free us from our traumas and limitations. Every now and then it’s good to bounce through space, and, at its best, dance can transform and bring about change. Too often, the power of dance is diminished and, unfortunately, too many people never dance at all. Projects like “Tanzplage“ by choreographer Lea Martini, are resisting these tendencies, creating temporaryoases of joy.

Four years ago, in 2014, I met the choreographer Lea Martini on a sort of blind date. Johan Forsman, the artistic director of the theater Skogen in Gothenburg (SE), thought that Lea and I had several common interests and he wanted us to meet: we are both working with excessive physical states, and at that time, in 2013/2014, we were both focusing on the medieval phenomenon of the dancing plague.

Following Johan’s invitation, our blind date happened in January 2014. Skogen provided us with space and time and Lea and I spend two very intense residency weeks in Gothenburg. Our schedule was very ambitious, we wanted to work together in the studio and exchange our ideas and thoughts regarding the dancing plague, while each of us also worked separately in the studio: I on the preparation of the piece „Tanzwut“, which was to premiere later in autumn of 2014 and Lea on a solo. In our second week we gave a workshop for professional dancers. This culminated in the creation of a group piece, based on excessive repetitive movement, presented at the end of the week.

Lea got interested in the idea of spreading the dancing plague and developed her project “Tanzplage”, based on the work we did in Gothenburg. In 2015, she invited me to work with her on this project as a dramaturge. We created a performance consisting of several parts: over the course of the evening, the audience gets more and more infected by the dancing plague, until they end up dancing themselves.

A video by Diego Agulló and Jorge Ruiz Abánades, shown in the foyer of the theater, introduces the audience to the historical phenomenon. The audience then enters the theater space, where Lea Martini is already waiting on stage. What follows are 12 minutes of extreme exhaustion. Starting with a small movement of the head, swinging from one side to the other, Lea’s body gets more and more invaded by this movement. She starts to breathe heavily and her whole body gets thrown around, moved by the virus of the dancing plague. Through the excessiveness and exhaustion, her body and face get more and more deformed, evoking grotesque images reminding me of Francis Bacon’s paintings. During the solo, Lea is standing at the very edge of the stage, and only after a while does the audience discovers that the stage is full of bodies. Infected by the movements of the single body, they slowly and hesitantly start to twitch, sway and shudder.  Lea’s body is the host, spreading the virus.

The group of people on stage is composed by 24 local dance enthusiasts of all ages – up to now we had participants from between 17 and 80 years old – who have participated in a one-week workshop with us. What follows is a very powerful and dynamic dance part, based on rhythmical and repetitive movement. This big group of people meanders through space, finds common movements, breaks out of rhythms, and moves through spatial formations – negotiating on stage democratic processes, finding consensus in order to then again break into individual parts and smaller groups.

It is truly special to experience such a big group of very diverse bodies dancing together on stage so passionately, exhausting themselves in front of our eyes. Seeing them breathe, sweat, laugh and transgressing their individual physical borders. A wave of vitality, freedom and power hits the audience. Shortly before reaching frenzy, the group stops abruptly and leaves an energized room. Now the audience gets invited to lie down on stage and experience a 20-minute sound-travel concert composed by Tian Rotteveel. It is the incubation time where the dance virus, initiated by Lea Martini, cultivated by the group and spread onto the audience, should have a time to sink in and prepare for the last outburst of the night. The concert seamlessly fades over into dance music and the performers as well as the audience end the evening with a 45 minutes dance night.

And in every city – up to now we brought this project to Gothenburg, Stockholm, Freiburg, Berlin, Düsseldorf and Frankfurt/Main -, I am amazed how in the end everybody, no matter if young or old, is freely dancing on stage, shaking their body without restraints, and with a big smile and open faces. It is pure joy! Over the course of the 2,5 hours of the event the borders between audience and performer, between stage and audience space, dissolve, the theater space completely transforms and becomes a warmsocial space. The evening mostly ends very emotionally, with audience members and participants thanking us for this wonderful, and most notably, judgement-free experience.

Working on this project, I get reminded about the power and importance of dance. The exhilaration of a group moving together as one produces an experience of collective joy that is both pleasurable and therapeutic, and goes way beyond verbal communication. We have been dancing frenetically in circles and lines, jumping, swaying and shaking our bodies in collective ecstasy for thousands of years. Dancing has the capacity of healing us from our demons, it transforms us and can free us from our traumas and limitations. Every now and then it’s good to bounce around and at its best, dance can transform, radiate and bring about change. Too often, the power of dancing is diminished and, unfortunately, too many people never dance at all, or never come even close to this blissful feeling of ecstasy, because of social conventions, lack of opportunity, or shame.

Projects like “Tanzplage“ are resisting these tendencies, creating temporary oases of collective joy and using the theater space as a judgement-free dance floor while dissolving the borders between performers and audience – and this is important!

So now, get up from your computer or phone, put some music on and go wild! Alone or with friends, it will definitely increase your well-being and give a spark to your day!

Lea Martini works as a choreographer and dancer and lives in Berlin. Her never-ending interest in physical intensities brought her first to gymnastics, later to the study of contemporary dance and choreography at the Artez (NL) and the School for New Dance Development (NL). Her pieces, which are mostly worked out in collective structures, are invitations to the audience to encounter the performance as a place of contemplation and physical empathy. They explore the question of how to approach socio-political issues physically and how to share new perspectives through moments of shared lingering and experiencing. 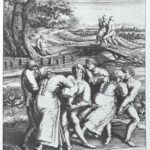 Also called Saint Vitus dance or choreomania, it is a social phenomenon that occurred between the 14th and 17th century and that has its roots in Western Europe, particularly in Germany and Luxembourg and that was considered a widespread disease of the Middle Ages. Throughout the centuries it “infested” groups of people, sometimes thousands at a time, who would dance uncontrollably for hours and days until they collapsed from exhaustion or even died. The theories on the causes for these spontaneous outbursts of mass dances are as numerous as diffuse and highlight its scandalous character and the irritation this phenomenon has caused in society.